Leaving Home: My Trip to Greece

Hello, hola, vγεια σας, zdravo, ciao!!! Some links in this and other articles on this website may be affiliate links. This means that I get a small commission if you choose to make a purchase. ~ Daisy

The day came faster than I expected.

Everyone kept asking me if I was excited and I really wasn’t because was this even going to happen? Was I really going to run away from home or would some barrier arise to make it impossible?

My right-hand gal was on vacation at a time that should have been perfect but then life became a clusterf*ck. We literally chose the weeks she was going to be away for the “perfect timing.”

But then, the apartment I was moving my daughter into had some major issues and we had to delay our move and live out of boxes. The past month was a blur of visits, last-minute obligations, and a heartbreaking funeral.

Then, just like that, it was time to go.

Anyway, the last month was utter chaos. I was exhausted, anxious, not sleeping, couldn’t eat because my digestive system was in an uproar, and was too busy to even work which isn’t good when you require a media presence for a living.

One day, I’m hanging out with my youngest daughter eating popcorn at the movies. The next day we’re hugging in the airport trying not to cry and mess up our mascara.

My other daughter had an easier time of it, as she’s been out of the house and in another country for 6 years or so.

Talk about second, third, and four hundred-ninetieth thoughts. But I did it. I got on that plane and flew into a new life.

We can change our stories at any point in our lives. If I can do it at 50, you can do it wherever you are, too. Maybe your plot twist isn’t going to be as outrageous as mine but it’s your plot twist. You are the author of your autobiography so make it an adventure.

The first part of the trip 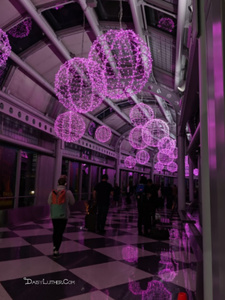 When I arrived at O’Hare in Chicago I walked about 723 miles to get from my first flight to my second. O’Hare is beautiful but HUGE. And also, you know how most airports have those “people mover” conveyor belts to help you close the distance a little more easily. O’Hare does not have people movers. O’Hare wants YOU to move your butt all by yourself.

There was this one stretch of very pretty lights but it wasn’t enough to make me say, “Wow, I’m really glad I got to walk through this.” Nope, I still thought, “O’Hare, I wish you’d get your s**t together so I don’t have to walk 723 miles lugging my carry-on crap to change planes. (Yes, what was once desirable to have with me during my flight was now “crap” with which I had to contend.) Maybe if they’d had pretty lights the entire way, but nope, most of the torturous route was made up of long, blank walls.

The middle part of the trip

When it was time to board the plane for the longest leg of the journey, I fervently hoped that I would not be squeezed in between two people. Part of my wish was granted right away when I had to excuse myself to scooch over to the window seat. The gentleman on the aisle seat was friendly but not too friendly if-ya-know-what-I-mean. It turned out we had both been on the same flight from the little municipal airport in Virginia. It was like the airline gods wanted us to meet and become buddies.

When the flight attendant announced that all passengers had boarded and my friendly neighbor and I still had an empty space between us, I said “YESSSSSSSSSSSSSS!!!!” and made him high five me. Well, I didn’t make him do it but it would have been kinda rude if he’d left me hanging. He was happy too that we’d have a little extra space.

I have never in my entire life been able to sleep on a plane – I am a raging insomniac. So I did something I’ll advise you not to do.  I popped a Xanax that my friendly doctor had given me for this flight and chased it with a plastic cup of whiskey. (Who knew that alcohol was free on Lufthansansa?) Then I also had a plastic cup of white wine with dinner, and I was out like a light. I slept through breakfast, seven whole hours of snoozing on a plane. And I’m really glad I did because it made the rest of my trip so much easier, as I was traveling for a solid 18 hours.

Bright-eyed and bushy-tailed, I arrived in Munich. And I really was bushy-tailed. You should have seen my hair. 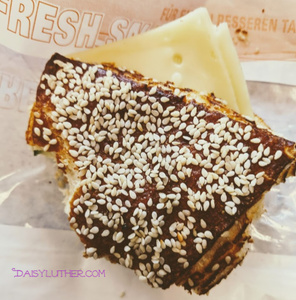 I had to go through Customs and Immigration in Munich and it was quite a pleasant exchange. The handsome young man spoke perfect English with a delightful accent and asked me about my travel plans, as I was the bearer of a one-way ticket. I told him I understood the Schengen rules and would not exceed my time in that zone. With that, he warned me seriously, “Please don’t overstay, because it will be on your passport forever and you won’t be allowed back.”

Then he stamped my passport and sent me on my merry way. The entire exchange took less than three minutes and was completely without stress. I can’t recommend this airport highly enough for your layovers.

The one thing it does not have – at least to this non-German-speaking gal – was good signage to help me find my next gate. But no worries – a nice lady in the airline lounge got me the gate number and pointed me in the right direction I had plenty of time for a sandwich that looked a lot like the last sandwich I got at the Munich airport. It was called a “pretzel with Emmental” but I’ll let you be the judge of that. The veggies were crisp, the cheese just the right level of sharpness, and the bread was to-die-for.

(I know you’re supposed to take a perfectly-staged photo before you take a bite of the sandwich. Oopsie.) 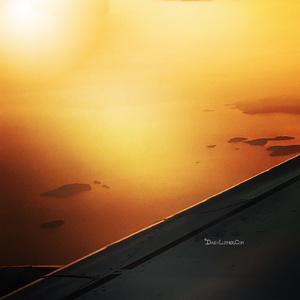 If I ever had to go through the Munich airport and not get this sandwich, I’d be devastated.

Sandwich in hand, I got on the last flight of my journey where again, I got to have a skipped seat between me and the next dude. He wasn’t as friendly as the first guy but he wasn’t weird or malodorous, so that’s an air-travel win in my book.

And then the pilot said something in German and I caught the world “Mykonos” and looked out the window (yes – I got window seats the whole way!) and captured this foggy sunset and introduction to Greece.

How is that even real? It’s like Greece rolled out an honest-to-goodness golden carpet to welcome me, friends. I know it’s just a sunset but it felt like a sign.

And then I was in Greece.

It was so much easier than I expected to navigate the airport in Athens and get to my Airbnb.

I didn’t have to go through Customs as I did so in Munich, the place I first landed in Europe. I had too much luggage because of an unfortunate, last-minute catastrophe with my carry-on bag. I had two full-size suitcases, a backpack, and a purse.

I decided to get a cart instead of attempting to struggle with all that stuff but only had Euros in denominations of 50. I bought a candy bar at a concession stand and got a one-Euro coin so I could get a cart. Then it was just a matter of grabbing a seat and waiting for my stuff to come out on the conveyor belt.

Once I was loaded up, I got in the taxi queue, which is the safest way to get a cab at the airport. It’s important to note that the fares from the airport to the city are fixed. It’s 38 Euros during the day and 54 Euros from midnight to 5 AM.

When exiting Athens Airport you will find taxis waiting between Exit 2 and Exit 3 at the arrival area. You should get in the queue and when your turn comes, the policeman in charge will signal you to get into the next available taxi…

…The price includes totally everything. Luggage charge, tolls fee, VAT, meter start, airport charge, etc. So, you don’t have to pay anything more than the above. The same fixed fares apply when you pick a taxi from Athens centre going to the airport. (source)

I sent my Airbnb host a message to let him know I was leaving the airport and on my way to his rental.

A police officer is there directing people and taxis, although it didn’t stop an enthusiastic party of five from butting in front of me in the line. The lady behind them rolled her eyes at me and said, “I guess they’re exempt from the line?” and we had a little giggle.

I did get the next taxi and now I know what they mean by “Greek God.”

He was old enough to have some silver in his hair and strong enough to pick up my 50-pound suitcases without so much as a grunt. He didn’t speak any English or I swear we’d be in a relationship already. I showed him my address on my phone and he corrected my horrific pronunciation of the street name.

The nameless, wildly handsome taxi driver drove at the speed of light. Well, not quite that fast, but we hit 170 kmh (105 mph) flying down the highway. I don’t know if he always drives that fast or if he saw me checking him out and wanted to get rid of me. To-may-to, to-mah-to.

He rapidly unloaded my luggage right at the door, I gave him his fare and a tip, and he, the potential love of my life, was flying up the road before he got the door shut completely.

My Airbnb host was there and showed me the lay of the land. (I’ll talk more about the delightful apartment in my next post.)

I was really glad I had that chocolate bar because by the time I arrived it was late and I wasn’t comfortable wandering around after dark in search of food. Between that and my Lifestraw water bottle, I was ready to crash.

Because, baby, I am in Greece. 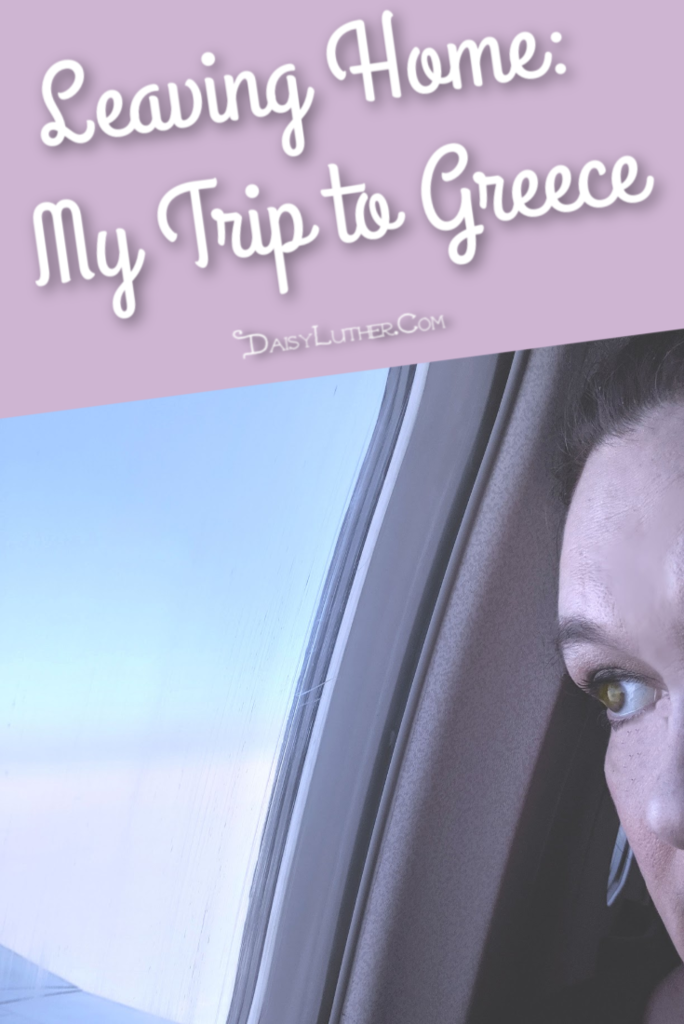 There’s No Perfect Time and It’s Not Too Late.

Got a Big Dream? Get Ready for Naysayers, Cheerleaders, and Other People’s Opinions

9 Travel Mistakes That Will RUIN Your Dream Trip

The first time I visited the Plaka neighborhood of Athens, it was by accident. I had asked the cab driver to take me to a restaurant called The Olympion but between my lack of Greek and his lack of English, I ended up being dropped off at the Temple of Zeus the Olympian. Here is what I was looking at. I asked the driver if the restaurant was ...