The first time I visited the Plaka neighborhood of Athens, it was by accident.

I had asked the cab driver to take me to a restaurant called The Olympion but between my lack of Greek and his lack of English, I ended up being dropped off at the Temple of Zeus the Olympian. Here is what I was looking at. 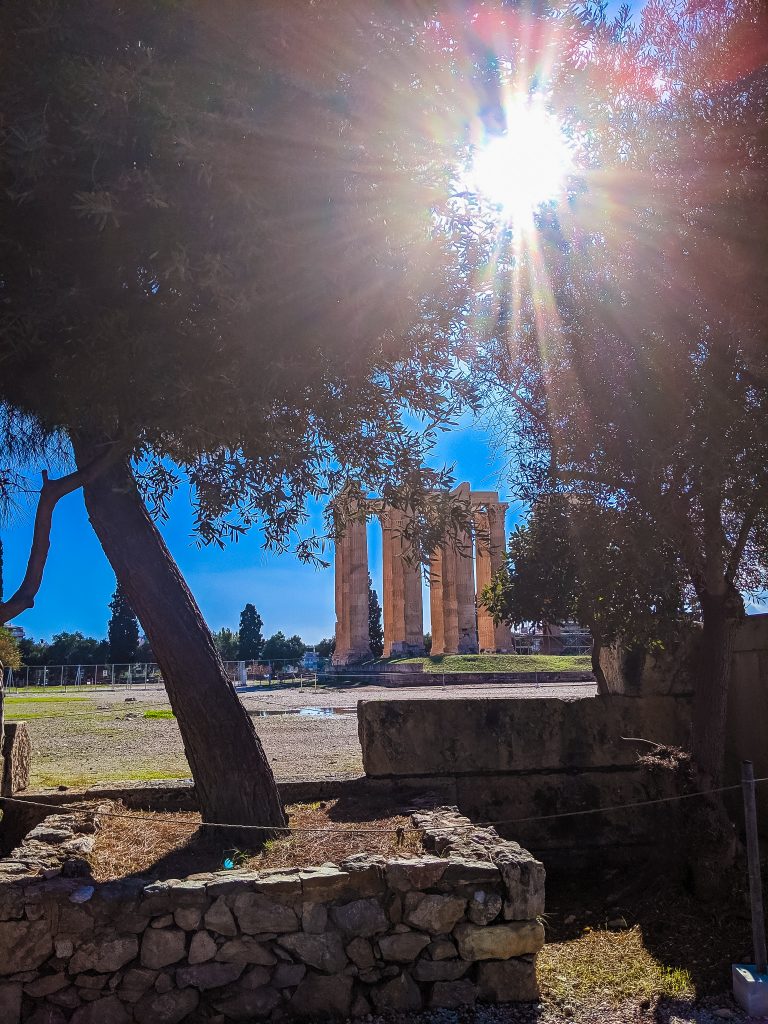 I asked the driver if the restaurant was there and he nodded enthusiastically and said, “Olympian!”

Initially, I was a bit annoyed because I was hungry bordering on hangry. I was going to call myself an Uber to get to the restaurant but then I thought to myself, “You are right beside an ancient temple! You can see the Acropolis! You twit, there are restaurants here too!”

And my self answered, “You’re right. Duh.”

And so I learned the most valuable lesson of travel: roll with it.

If I hadn’t just rolled with it I would have missed out on a true Athenian experience – visiting the Plaka. It’s a symbol of the city with winding pedestrian streets filled with flowers, people and music. The entire neighborhood is watched over by the Acropolis high on a hilltop above the neighborhood. While it’s true that it’s filled with tourists, it’s a spectacular introduction to Athens and you’ll find plenty of English speakers to help you.

It turned out to be one of my favorite places in the entire city.

What is the Plaka?

The Plaka is one of the oldest neighborhoods in Athens.

Pláka is the old historical neighborhood of Athens, clustered around the northern and eastern slopes of the Acropolis, and incorporating labyrinthine streets and neoclassical architecture. Plaka is built on top of the residential areas of the ancient town of Athens. It is known as the “Neighborhood of the Gods” due to its proximity to the Acropolis and its many archaeological sites…

…Plaka was developed mostly around the ruins of Ancient Agora of Athens in an area that has been continuously inhabited since antiquity. During the years of Ottoman rule, Plaka was known as the “Turkish quarter of Athens”, and the seat of the Turkish Voevode (Governor). During the Greek War of Independence, Plaka like the rest of Athens, was temporarily abandoned by its inhabitants because of the severe battles that took place in 1826. The area was repopulated during the first years of King Otto’s rule…

…In 1884 a fire burned down a large part of the neighborhood which gave the opportunity for the archaeologists to conduct excavations in the Roman Market and Hadrian’s library. Excavations have been taking place continuously since the 19th century. (source)

I walked from the place I had been dropped off to a row of buildings I saw in the distance. I passed Hadrian’s Arch on my stroll. (Yeah. Hadrian’s freaking Arch! And I had almost called an Uber and missed this!) 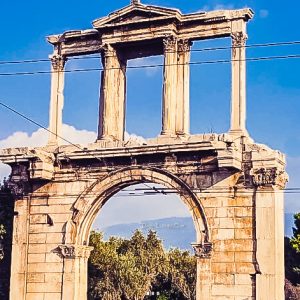 Then I saw a little cobblestone street tucked in between two buildings and it was game on. I wandered back into a veritable wonderland of shops and flowers. Even though I visited in October, the bougainvillea was in full bloom and climbed everywhere.

You honestly don’t need a “guide” to the Plaka. You just need to go there and wander wherever your feet take you. There are shops galore. Some are filled with touristy stuff like mugs and shot glasses and t-shirts, while others have the finest handmade jewelry and sculptures. There are dozens of restaurants, each more delicious than the one before it. So take my advice. Just get dropped off Leoforos Vasilisis Amalias, head between the shops on the main road, and start walking.

Below you can see some of the photos I took in the Plaka. I visited on at least three different occasions during my stay in Athens and every time was a completely different experience.

This was the first of many happy accidents that I’ve had while traveling, and changing my attitude about them instead of getting in a snit when things don’t go my way has been the most positive mental change I’ve made since embarking on a full-time travel lifestyle. And you don’t have to be halfway across the world to give “rolling with it” a shot. Trust me, we’d all be a lot happier if we looked for adventure instead of perfection.

What you should know about the Plaka

Here are the answers to the most commonly asked questions about visiting the Plaka.

How physically challenging is visiting the Plaka?

Even if you aren’t extremely fit, if you are mobile, you’ll find the Plaka reasonably easy to visit. Most of it is flat or on a very gradual incline.

If you are mobility-challenged, you should know that some of the sidewalks and pedestrian streets are rough cobblestones, so they could pose some difficulty.

There aren’t any public restrooms that I saw, but restaurants all have bathrooms for customers. Note that most restaurants have their bathrooms either upstairs or downstairs. Not many have restrooms on the main floor, so if you have trouble with stairs, this could be a problem.

Is there anything tourists should be warned about in the Plaka?

Like many tourist areas, you have to be alert to your surroundings. Practice ordinary anti-pickpocket precautions. Most of the store owners are also watchful because they don’t want their neighborhood to be known for crime.

So. Much. Food. There are dozens of wonderful restaurants in the Plaka where you can get everything from traditional Greek food to pizza to street food to gelato and everything in between.

How expensive is the Plaka?

The Plaka neighborhood is a bit more expensive than less tourist-oriented neighborhoods. However, compared to American prices, you’ll still be satisfied with the price of a good meal. I got the dinner pictured below with a salad, bread, and a glass of delicious local wine for around $11 US. 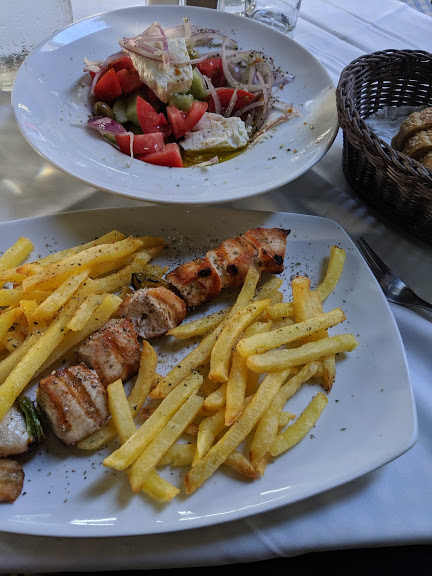 Some of the shops will negotiate with you while others will not. I found that souvenirs were pretty reasonably priced to start with and jewelry was negotiable, particularly for cash.

Have you been to the Plaka?

Have you traveled to Greece and visited the Plaka? What was your favorite thing about it? Do you have any questions? The comments section awaits! 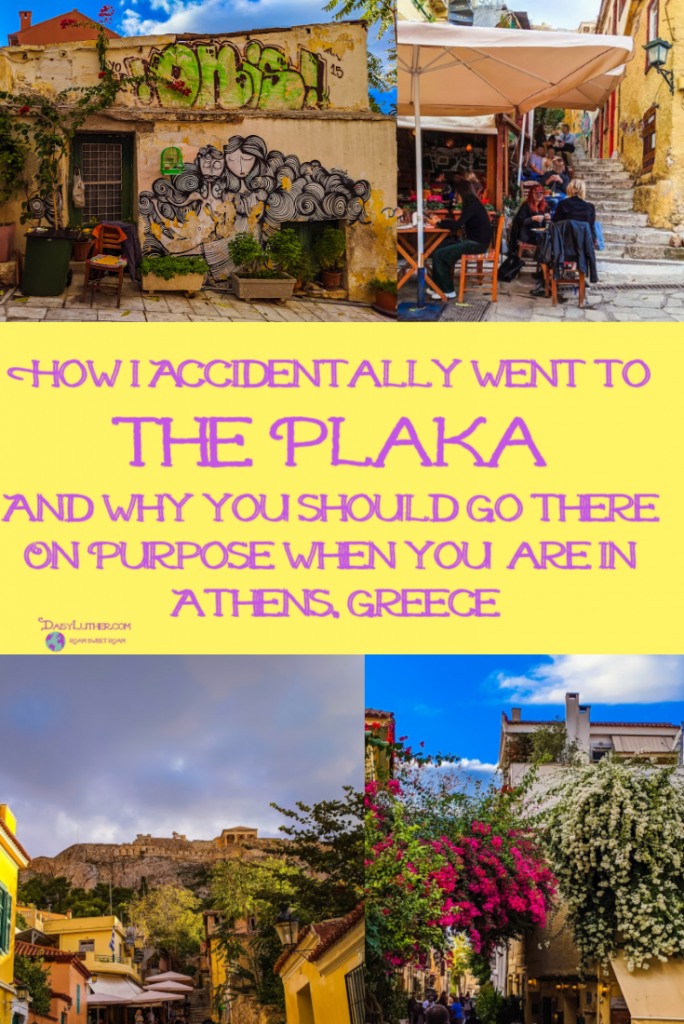 An Uncreepy Tourist's Guide to The First Cemetery of Athens

It probably sounds weird to go visit a cemetery as a tourist attraction, but that's because there aren't many graveyards out there like the First Cemetery of Athens. It's described by many as an "open-air museum" and once you see the photos I have to share with you, you'll completely understand why. The cemetery opened in 1837 and became the resting ...