There’s No Perfect Time and It’s Not Too Late.

And perhaps the saddest part of all is that I’ve watched the same people use reason #1, only to be followed by reason #2 some years later.

I just want you to know some things.

I would love to lose 20 pounds. I got divorced 17 years ago. I am not rolling in money and I’m not retired. I have kids who I still give a helping hand to financially on occasion. I’m fifty years old upon the writing of this post and when I started traveling full-time nearly 6 months ago, I was in terrible shape, huffing and puffing up the steep streets of Athens.

I had extended family members who were furious with me for leaving the US on a one-way ticket to just “gallivant” around by myself. I had so many people try to talk me out of it. These people sent me every horror story they could find about unfortunate single women travelers who were murdered in a variety of gory fashions or people who were kidnapped while on a safari or folks who just vanished, never to be seen again.

There were people in my professional life who thought I was crazy. My main business is in the survival niche and quite a few of my readers wrote to express their horror and dismay that I’d just pick up and leave.

But I didn’t want to wait until reason #2 kicked in and I was 88 and had to have a hip replacement and wouldn’t be able to get up the stairs while dragging a big-ass suitcase up with me.

So I ignored all those people who hated the idea of the life I wanted to live and I surrounded myself with the people who cheered me on, like my daughters and my closest friends. I have readers who love both of my websites and enjoy hearing about adventures just as much as they love hearing about baby chickens, pandemics, and urban survival courses.

Any time you make a big, life-altering decision, you’ll get a lot of naysayers, cheerleaders, and other people’s opinions, as I’ve written previously. A lot of folks feel like when you go do something they wouldn’t do that you’re leaving them behind. (And sometimes, maybe you are. And sometimes, maybe you should.) Others feel like your decision is a slap in the face of who they thought you were. And trust me, they won’t be shy about telling you in excruciating detail of their disappointment.

I’d be lying if I said it wasn’t a little bit hurtful. But to quote the poet Jonny Ox, “Don’t let the tamed ones tell you how to live.” (FYI: that quote is #2 on my list of Tattoos I Want to Get.”)

I’m not suggesting everyone needs to sell all their stuff and get a one-way ticket to exotic lands. But I am absolutely, 100%, unequivocoly suggesting that you get your butt in gear and figure out a way to live a life that doesn’t make you feel bored, restless, and unsatisfied at the end of the day. The life you choose is up to you. Are you gonna lay on the couch and do Buzzfeed quizzes to figure out what kind of burrito you are or are you going to get off that couch and do something you’d want to put in your autobiography?

Notice how many of those people who are criticizing your choices are living lives with which they feel unsatisfied. Do they just want you to be unhappy right along with them? Misery does indeed love company, and if you’re going out and fulfilling your dreams and finding your happiness, then you’ll be pretty crappy companionship for the miserable.

This will change you.

Throwing off the shackles of expectations will change you. You’ll become a different person. Because the more often and enthusiastically you free yourself, the easier it will become. You’ll be that person who doesn’t hesitate to say no to some obligatory social ritual that bores you to tears. You’ll be that person who knows, right down to your little pink toes, that there is something better out there, something so much better that your old life will feel like a distant memory. You’ll know it because you’ve experienced it.

It’s like dating someone who is sweet and romantic after dating a complete asshole. It’s like an entirely new world opens up and you think, “Oh, so this is how relationships are supposed to be.” And once you experience it, there’s no going back – there’s nothing that would compel you to go back to dating assholes.

And don’t you want that kind of happiness now?

There is no perfect time.

It’s sort of like having kids. There is no perfect time to do it. My first daughter was an astounding shock and my second wasn’t exactly well-planned either. But they’re everything that is beautiful and important to me, crazy timing or not.

And the same thing is true in life. You just make it work and it is going to be wonderful whether the timing is “ideal” or not.

You shouldn’t wait until…

You lose 20 pounds. Forget about that stuff. You deserve a life full of the things that bring you joy whether you weight 90 pounds or 300 pounds or any other random number you can think up.

You get married. Girl (or boy)…hell no. You don’t need an “other half” to live adventures. You are a whole person all by yourself. You get out there and embrace your independence. There is absolutely nothing wrong with being a single person.

You get into shape. The best way to get into shape is to be active. And that has figured a big part in my new lifestyle. I walk everywhere. At my last Airbnb, I walked to the market and then carried my heavy backpack loaded with water, food, and caffeinated beverages (okay, and alcohol) up 241 steps to my apartment. The first day I did it I had to stop three of four times on the way back up and heck yeah, I counted those steps. By the time I’d been there two weeks, going out for my daily trip to the market, I was barely out of breath when I powered right to the top without hesitation. Get into shape by getting out there and doing stuff. You’ll surprise yourself, I promise.

You have more money. Okay, reality states you do have to have a bit of money to go travel around the world, but you probably don’t need quite as much as you think you do. (Here’s how I afford to travel full-time.) Stop trading your life for dollars or you’ll end up at the end with only dollars to show for it. Go do something memorable. You can make more money later.

You retire. At the rate things are going, most of us are going to work until we either die or we can’t work anymore. As well, none of us knows how much time we’ve been alotted on this rock. It’s the one thing that is truly finite. (Unless Elon Musk has his way. I just know he’s going to figure out a way to freeze us and thaw us back out later.) You deserve to be happy well before you reach retirement age so stop putting it off.

It’s not too late.

Maybe I wrote all the heartfelt advice above 20 years later than you wish you’d read it. That doesn’t mean it’s too late for you to have remarkable experiences. It doesn’t mean that you’ve passed some arbitrary expiration date after which time you must only knit hats for preemie newborns. (Not that there’s anything wrong with preemie newborn hats. On the contrary. They’re fab.)

Maybe your adventure will be modified somewhat but it doesn’t mean you can’t have an adventure. Heck, one of the happiest couples I know got married to each other at 78 years old. A beloved friend of mine who passed away right before I left was 104, and she lived every day of her life with laughter, a beer, and a sense of adventure. She traveled right up until the end, too, going all over the US, hitting up cruises, making inappropriate jokes and then throwing her head back cackling loudly at them.  Also, she never got married but she had hundreds of kids because she basically adopted every soul in her lunch line at the school where she was a cook for decades.

Her funeral was both heartbreaking and hilarious, just as she would have wanted it to be. I wish she had written an autobiography because it would be an epic guide to a life that was unsurpassed in pure joy.

And speaking of autobiographies…

Would it be something that people read and think, “What a treasure! What a batcrap crazy-in-a-good-way person she must have been! I want to do half the things she’s done!”

Or would it be you, doing sudokus on your phone watching reruns of Law and Order SVU until Gilligan’s Island comes on at 3 am? Then you, smacking your obnoxious alarm clock aggressively to snooze it until you finally drag yourself out of bed and stare at the coffee maker, willing it to provide you with the fuel you need to survive another day at your office?

You can do better than that. You can go on hikes and you can lay on the ground and find constellations on a starry night and you can write and paint and touch the lives of others. You can think deep thoughts and have crazy love affairs with mysterious Italian men who may or may not be actual counts or dukes or something. You can see the world, even if that means the next county over from where you are right now.

Every single day when I get up, I think to myself, “I’m going to do at least one thing today worth putting in a book about my life.” At night, I ask myself, “What did I do today that would be a fine entry into my autobiography?”  And reality sometimes replies, “Not much.” But more often, now that I’ve gotten off my butt and started living, I have something worth writing about.

All of these moments are the ones I want to experience. I want to get out there each day and do something memorable, even if they’re only meaningful to me.

Will I ever actually write that book? Probably not. I’m too busy living it. And I’m glad I didn’t wait for the right time. I’m glad I realized it wasn’t too late.

If I could give my daughters, you, heck, some random stranger – heck, the whole damn world – one piece of advice it would be this:

The perfect time to live the life you want is right now.  It may be complicated, confusing, scary, or socially unacceptable in your current circles, but you, my friend, are the author of your autobiography.

This is the perfect time. It is not too late. 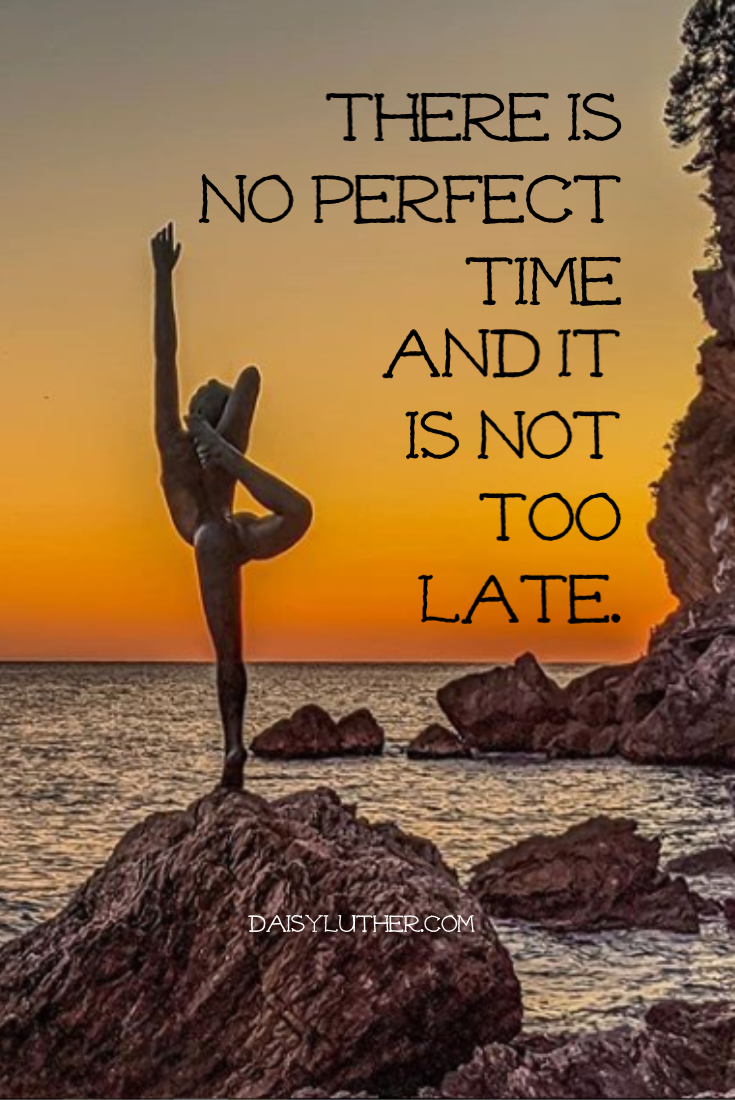 Got a Big Dream? Get Ready for Naysayers, Cheerleaders, and Other People’s Opinions

9 Travel Mistakes That Will RUIN Your Dream Trip

Leaving Home: My Trip to Greece

Every city has its own personality and Athens, Greece is no exception. Athens is nothing less than vivid, both day and night. During the day, it's bursting with color between the Athens-blue sky, the brightly-hued buildings, and kaleidoscopic greenery and flowers everywhere. The streets are busy - be careful crossing because the drivers there ...