Sometimes when you’ve been in a bustling city for a while, you need a little nature in your life. And the perfect place to get that nature in Athens is by visiting the National Garden. (Formerly known as the Royal Garden.)

It’s a 38-acre oasis in the midst of the urban hustle and bustle. You step inside through a grand main entrance on Leoforos Amalias into a manicured park. Then you can take one of several different paths and without moments, you’ll swear you have somehow landed in Eden.

Playwright Henry Miller wrote of the National Garden in 1939, “It remains in my memory like no other park I have known. It is the quintessence of a park, the thing one feels sometimes in looking at a canvas or dreaming of a place one would like to be in and never finds.”

There are pergolas, paths, statues, flowers, creeks, ponds, tiny waterfalls, bridges, towering trees, a playground, and even a small zoo tucked into the middle. The air is fresh and fragrant, thick with the smell of whatever happens to be blossoming while you visit. There’s also a botanical museum which was closed when I was there, a children’s library, and a little cafe under a pergola.

When I was walking into the park, I grabbed a Koulouri Thessalonikis, which is a delicious traditional ring of bread topped with cheese or sesame seeds. And I was glad I did because I walked for hours.  I visited on a weekday so it wasn’t overly crowded.

This is both good and bad. It was good because I was able to enjoy everything and get lots of photographs without people in the way. It was bad because there were a couple of extremely persistent men who were rather difficult to shake. In one case, I walked up and joined a group of tourists because I was beginning to feel unsafe. It was a real shame and put a damper on an otherwise glorious outing.

The History of the National Garden

This stunning place is almost 200 years old and was the scene of a random moment that became pivotal for Greece.

The Royal Garden was commissioned by Queen Amalia in 1838 and completed by 1840. It was designed by the German agronomist Friedrich Schmidt who imported over 500 species of plants and a variety of animals including peacocks, ducks, and turtles. Unfortunately for many of the plants, the dry Mediterranean climate proved too harsh and they did not survive. Other botanists planning and managing the garden include Karl Nikolas Fraas, Theodor von Heldreich and Spyridon Miliarakis…

…The Royal Garden was the scene of an unusual turning point in Greek history. In 1920, at the end of World War I, Greece under King Alexander and the government of Eleftherios Venizelos remained committed to the Megali Idea (Greek for The Great Idea) that Greece should gain control of portions of Asia Minor… While walking in the Garden on September 30, 1920, King Alexander was bitten by a pet monkey (whose pet it is not revealed) and he died of sepsis three weeks later. His death ushered the return of his deposed father, King Constantine I who had been deposed for his pro-German sympathies during the First World War.

Upon his return to power, King Constantine assisted in the defeat of his political nemesis, Venizelos in the November 1920 General Election. The new Prime Minister, Dimitrios Gounaris, a monarchist, began replacing the Venezelist military staff with officers more loyal to the new King. As a result of this change in political environment and it is argued, the reduction in military experience by the Army’s General Staff, the Allied Powers withdrew their support.

The result was the 1922 Great Fire of Smyrna, the defeat of Greek troops in Turkey with exodus of Greek refugees and the 1923 Exchange of populations between Greece and Turkey known collectively by the Greeks as the Asia Minor “Catastrophe. Winston Churchill wrote, “it is perhaps no exaggeration to remark that a quarter of a million persons died of this monkey’s bite.”

In the 1920s the park was opened to the public and renamed “National Garden”. In honour of Amalia of Greece, the entrance was moved to the 12 palms she planted and the street in front was renamed Queen Amalia Avenue. Since then the National Garden, is open to the public from sunrise to sunset. (source)

It’s a botanical wonderland, too.

The Garden is home to 7,000 trees, 40,000 bushes and other plants, making up 519 species and varieties. 102 of them are Greek, with Judas trees, oleanders and carob trees  the undoubted stars, while others come from different countries all over the world such as Australian pines or Chinese trees-of-heaven. Centenarian Holm oaks, cypress trees and Canary Island date palms are also amongst the plants that have been a feature of the garden since it was first created. (source)

There are even some ruins in the National Garden. There are bits of columns you can walk right up to, as well as a Roman floor that was part of the courtyard of an ancient Roman Villa that was discovered during some excavations in the 1800s.

Here are some of the photos I took. I know. Like a kabillion. But there’s something beautiful everywhere you look and it’s 38 acres, y’all.

What you should know about the National Garden

Here are the answers to the most commonly asked questions about visiting the National Garden.

How physically challenging is visiting the National Garden?

There’s a lot of walking but nearly all of the paths are smooth well-packed pebbles. There are a few places with a handful of stairs, but these can be avoided easily by taking a different turn. I saw lots of people pushing baby strollers with no apparent issues.

There’s a bathroom at the cafe and one at the children’s library. There’s probably one in the botanical museum, but I wasn’t able to visit there.

There is a small cafe that had a few baked goods, soft drinks, and coffee. At the entrance, there are vendors selling traditional rings of bread and other concessions.

Is there anything tourists should be warned about in the National Garden?

For the most part, I would consider visiting the National Garden to be safe. However, if you are a woman you may want to stick closer to other tourists. I was harassed on two separate occasions when I sat down to enjoy the view and look through my photos. One fellow was just a little overly enthusiastic but the other one was pushy enough to make me feel very uncomfortable.

How expensive is the National Garden?

Entrance into the National Garden is free. If you are uncomfortable going by yourself, you may be able to find a tour through Airbnb Experiences.

Have you been to the National Garden in Athens?

Have you visited the National Garden? Do you have any questions about it? Let’s talk in the comments. 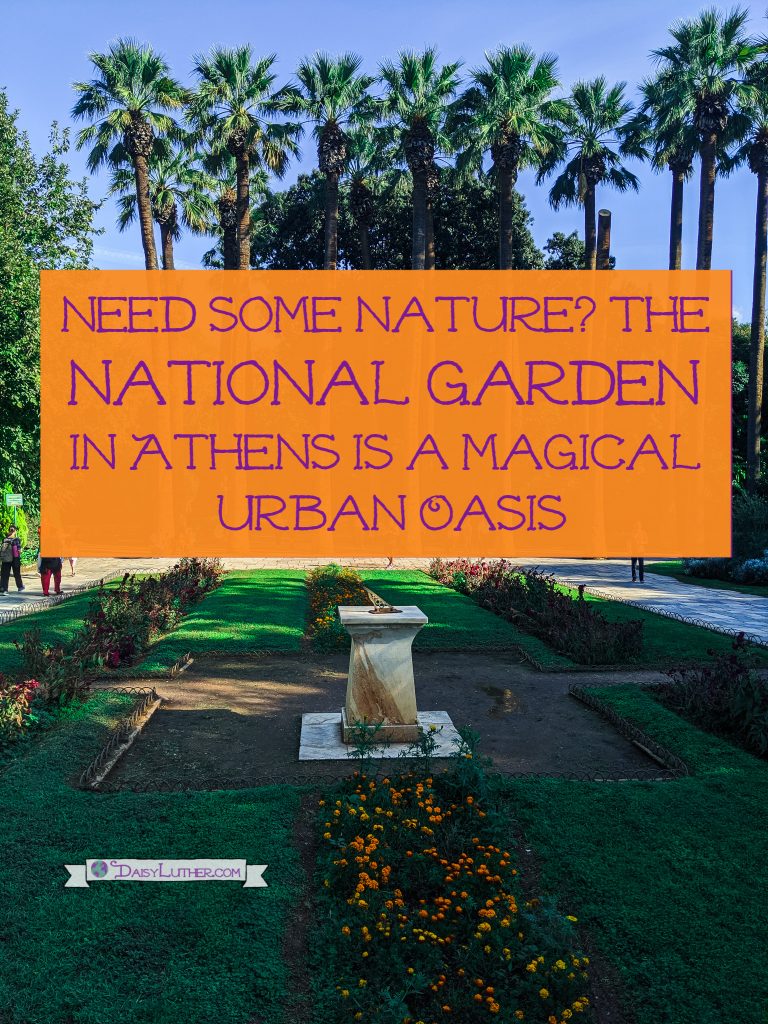 A question I'm frequently asked is how on earth a self-employed single mama like me is able to afford a life of full-time travel. It sounds pretty out of reach when you put it that way, but it's actually much more manageable than most folks would imagine. Heck, you might read this and think, "Wow, I could do this too!" (And I really hope that's the ...