After accidentally ending up at the Temple of Zeus the first time, I knew I had to go back at a time when I wasn’t hungry. Once I’d learned my way around, I realized it was only about a 20-minute walk from my apartment. So I set out one morning for a leisurely stroll to explore some ancient history.

In my opinion, walking is the absolute best way to explore a new area. You see so many little things you would miss just driving past in a car. It’s also a good way to get in shape for even greater adventures in the future. Just make it a casual stroll and be sure to stop at any place that happens to look intriguing. But I digress.

I walked over to the Temple, making a quick stop for a fresh carrot and apple juice – okay – and also a croissant – and maybe a cookie – at my favorite Athens bakery, ΚΑΛΛΙΜΑΡΜΑΡΟ (Kallimarmaro) at Mark. Mousourou 28. The croissants there are buttery and practically melt in your mouth. Since this place was right around the corner, I visited almost every day. (Does getting carrot and apple juice cancel out the croissant?)

The Temple of Zeus

The gates to the Temple of Zeus are located on Leoforos Vasilissis Olgas.

Whether or not you’ll enjoy visiting the Temple of Zeus really depends on your love for history and mythology. If you aren’t really into all that, you may just want to walk down Leoforos Vasilissis Olgas and snap a few photos from the sidewalk. But if you dig that kind of thing, you will find it worth the price of entry to go inside the fenced area and wander around.

You’ll find a gift shop and bathroom to the left of the entrance. Pee now or be ready to hold it for a while.

There are all sorts of interesting ruins and bits and pieces as you walk toward what is left of the temple. Signs telling you about all this stuff are in both Greek and English.

The History of the Temple of Zeus

The temple itself is a ruin but it’s still an imposing structure. Here’s some of the history:

The Temple of Olympian Zeus in Athens, also known as the Olympieion, was built over several centuries starting in 174 BCE and only finally completed by Roman emperor Hadrian in 131 CE. Its unusually tall columns and ambitious layout made the temple one of the largest ever built in the ancient world.

The site shows evidence of habitation from the Neolithic period while Pausanias claimed the ancient sanctuary to Zeus was first created at the site by the mythical figure of Deukalion. The earliest archaeological evidence of a temple in the area dates to the 6th century BCE. The tyrant Peisistratos the Younger began to build a new and much bigger Doric temple in 515 BCE. The plans were devised by the architects Antistates, Callaeschrus, and Antimachides but work got no further than the limestone base before Peisistratos was deposed and the project was abandoned.

Building work began again in 174 BCE under Antiochos IV Epiphanes, the King of Syria. He employed the skills of the Roman architect Cossutius and by 163 BCE the columns and entablature of the now Corinthian order temple were finally erected. Unfortunately, once again the project fell by the wayside upon the death of Antiochos. Another couple of centuries passed before no less a figure than Hadrian, during his stay in Athens between 124 and 125 CE, took up the construction again. Sulla had actually stolen a few of the columns in 86 BCE for re-use in Rome’s Temple of Jupiter and Augustus had dabbled a little with rebuilding the temple in the early 1st century CE but it was Hadrian, the great philhellene, who finally managed to finish one of the biggest ever ancient temples in 131 CE. (source)

At one point the temple was believed to have had 104 columns. It was pillaged in a barbarian invasion in 267 and damaged badly. Today, only fifteen of those columns are still standing, and a sixteenth lays on the ground where it fell during a storm in the 1850s.

You can walk all the way around the temple, but you cannot go right up to it. The gated area is quite large. At the north end is a small grove of olive trees with some benches in the shade, and you can get a quite-incredible view of both the temple of Zeus and the Acropolis if you go to the southern corner of the property and face north. You’ll be shocked by the sheer size and detail of the remains of the temple.

What you should know about the Temple of Zeus

Here are the answers to the most commonly asked questions about visiting the Temple of Zeus.

How physically challenging is visiting the Temple of Zeus?

Even if you aren’t extremely fit, if you are mobile, you’ll find the Temple of Zeus reasonably easy to visit. The area is extremely flat.

If you are mobility-challenged, some of the pathways are gravel so they’re a little bit rough.

There is a bathroom just as you walk in the gate.

There’s no food sold at the Temple of Zeus but you are about 300 meters from the Plaka, where there are dozens of restaurants.

Is there anything tourists should be warned about in the Temple of Zeus?

Because you pay admission to get in, you’re unlikely to deal with pickpockets. Obviously, remain aware of your surroundings, but this is a very safe attraction.

How expensive is the Temple of Zeus?

The price of admission is 12 Euros for adults and 6 Euros for students and children older than 5 years old. Be sure to check online – sometimes in the off-season you can get in cheaper on certain days.

Have you been to the Temple of Zeus?

If you’ve been to the Temple of Zeus, what did you think of it? Did you pay admission to go in, or did you choose to look from the sidewalk? Let me know what you thought in the comments. 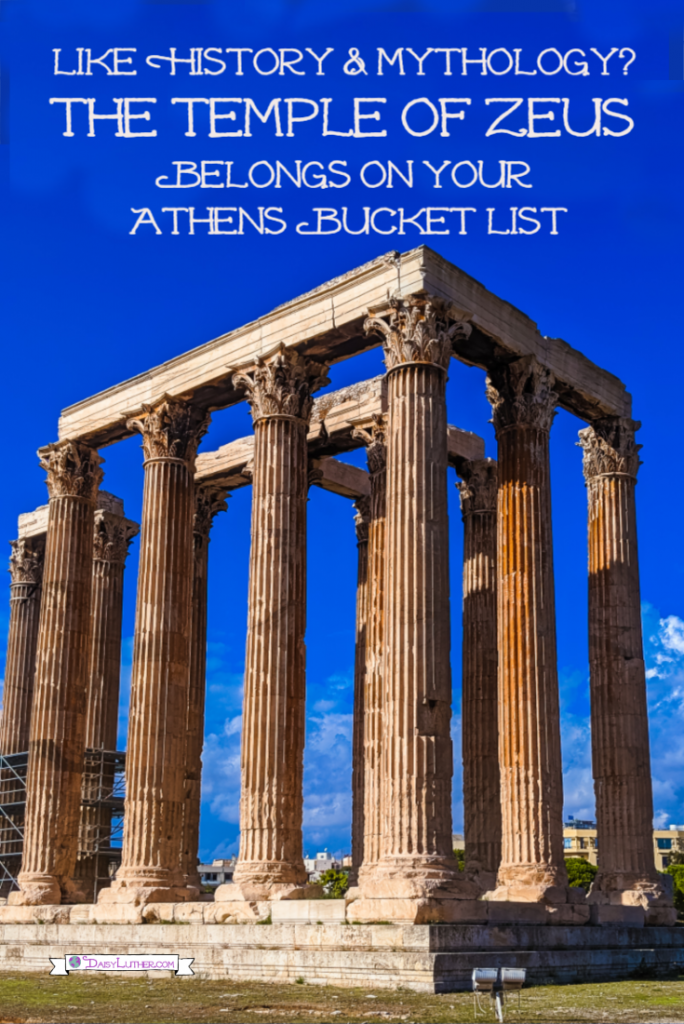 Sometimes when you've been in a bustling city for a while, you need a little nature in your life. And the perfect place to get that nature in Athens is by visiting the National Garden. (Formerly known as the Royal Garden.) It's a 38-acre oasis in the midst of the urban hustle and bustle. You step inside through a grand main entrance on Leoforos Amalias ...